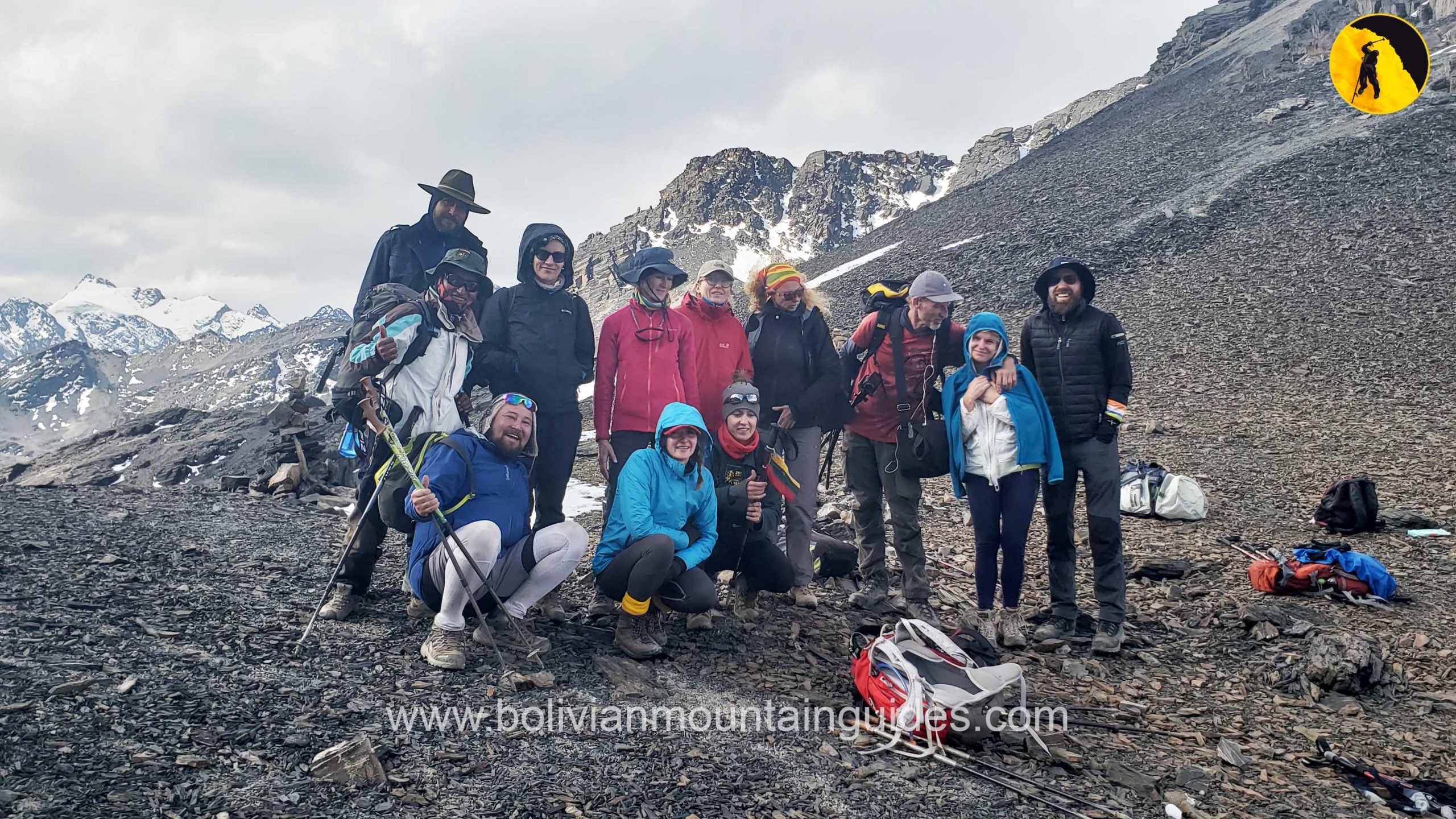 «One of the most beautiful and complete trekking circuits in Bolivia is the one that crosses the Cordillera Real longitudinally. Beginning in Sorata, the trek takes you through the valleys and hills of the Illampu, Ancohuma, Casiri, Chearoco, Chachacomani, Negruni, Condoriri, and finally Huayna Potosi massifs.»

At 7:00 am we left La Paz, passing through the beautiful landscapes of the Cordillera Real, including a view of Lake Titicaca. We then passed through the town of Achacachi and Warisata, where we were able to see the imposing Illampu and Ancohuma snow-capped mountains. We arrived at the pass, where we were able to see the beautiful town of Sorata at 2,700m. We then took the mules and began our trek, enjoying the beautiful landscapes of Sorata and the imposing snow of the Illampu, before reaching our first camp at Lacathiya at 3,850m.

We left in the morning and continued climbing to the Illampu pass at 4,749 m. From there, we were able to see the beautiful mountain, the landscapes of the high valleys of Sorata with its diverse Andean flora and fauna. Afterwards, we descended to the Estancia de Utjaña Pampa and set up camp nearby at 3,900 m.

We ascended the Kurahuasi pass at 4,479 m, then descended to the Cocoyo river. After passing through the village of Cocoyo, we continued to the campsite at 3,850 m. near Piedra Grande.

With an ascent of 2 hours, we reached the Sarani Pass at 4,500 m. From there, we were able to observe the snow-covered Wara Warani (Negruni), the Ch’ajolpaya river, as well as the snow-covered Calzada and many camelids.

This day, we headed for the Causeway pass at 4,900 m., near the glacier and the mountains of the Kasiris Group and Calzada. We then continued descending along the top of the lagoons until arriving near the Chojña Quta lagoon at 4,100 m. We set up camp in this place.

After breakfast, we started our tour by ascending to a viewpoint where we had an excellent panoramic view of the Calzada pass, the lagoons in the area, and the majestic Lake Titicaca.

In the afternoon, we arrived at the Jisthaña lagoon. We set up camp near this lagoon.

It is a very attractive route, with views of Lake Titicaca and the mountains of the Cordillera Real throughout. We passed through the Kellhuani ranch and finally reached the Chachacomani valley. In the upper part of the town of Alto Cruz Pampa, we set up our camp.

This day, we began our journey through the Chachacomani river and ascended towards the area of «Condor Jipiña». We continued our route to the Pura Purani river and later descended to the Jallahuaya river. We set up camp near this river.

After breakfast, we prepared to start the trekking. All of our luggage was transported by mules. We ascended in the direction of the mountain, at the base of which is the Wara Warani lagoon, a lagoon of various colors. We continued our ascent until we reached the 5,030 meter step, an excellent viewpoint. We descended to the valley and continued ascending gently, reaching the next step. While we descended, we were able to see the Khotia lagoon, near which we set up our next camp.

Lake Khotia (4,470 m). We slowly began the trek towards the Andean slopes. Upon reaching the first step, we began a descent. In the valley, we were able to observe the Taipichaca lagoon. After crossing the river, we ascended until we reached the Ajuani lagoon.

The road is winding but attractive. After crossing the first step, we descended until we reached the Laguna de Jistaña, where we took a break to have lunch. At this point, the path began to ascend towards the peak that represents our second step. In the valley, we saw the beautiful and isolated Juri Quta lagoon, surrounded by snow-capped mountains.

From the Juri Khota Lagoon, we began with a steep slope to reach the Ventanani Lagoon, a jewel nested at a height of 4,900 meters at the foot of the Condoriri glacier. From there, we continued climbing to a second step (Paso Austria, 5,140 m.). The climb to Pico Austria (5,350 m.) is recommended, its summit is an excellent viewpoint of the entire Cordillera. After a photo session, we descended to the Laguna Chiar Khota (4,630 m.) where we established our camp.

Today’s passage is the Condoriri pass, with an altitude of 4,900 m, which leads to the Racacha valley. We continued through the valley until we reached a small campsite, where we set up our camp. At the bottom of the valley, we could see the mountains of Maria Lloco and the west face of Huayna Potosi. 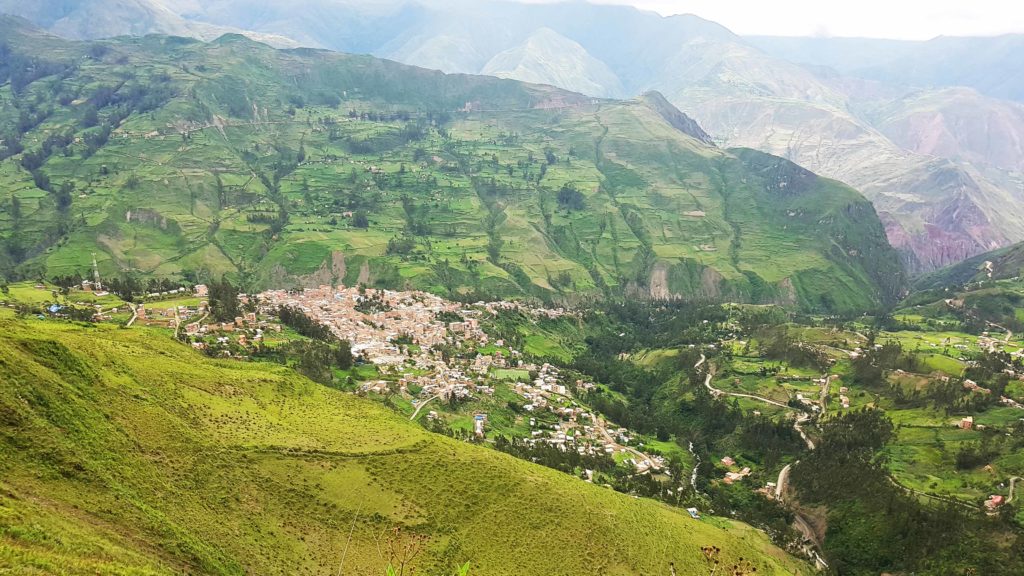 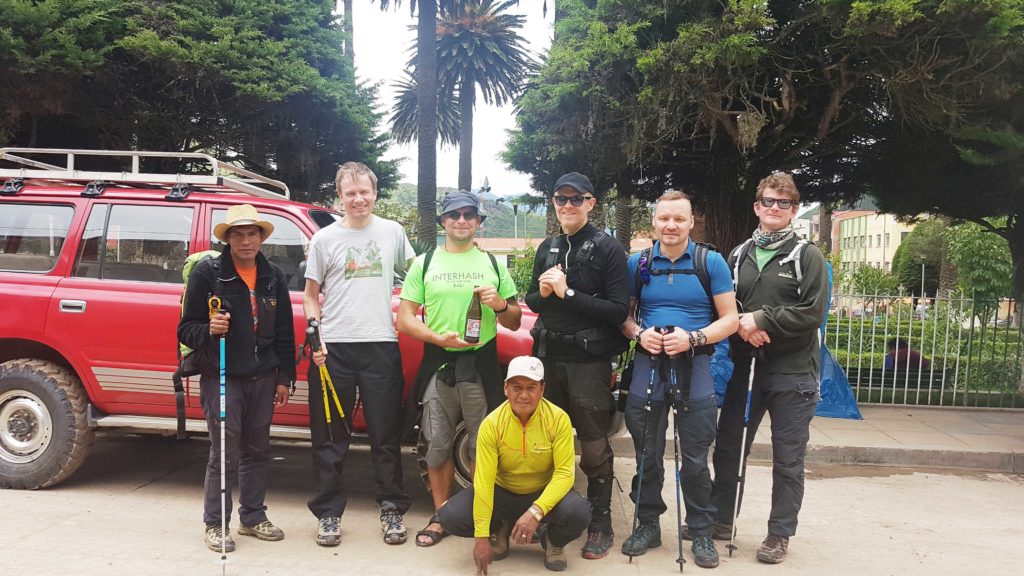 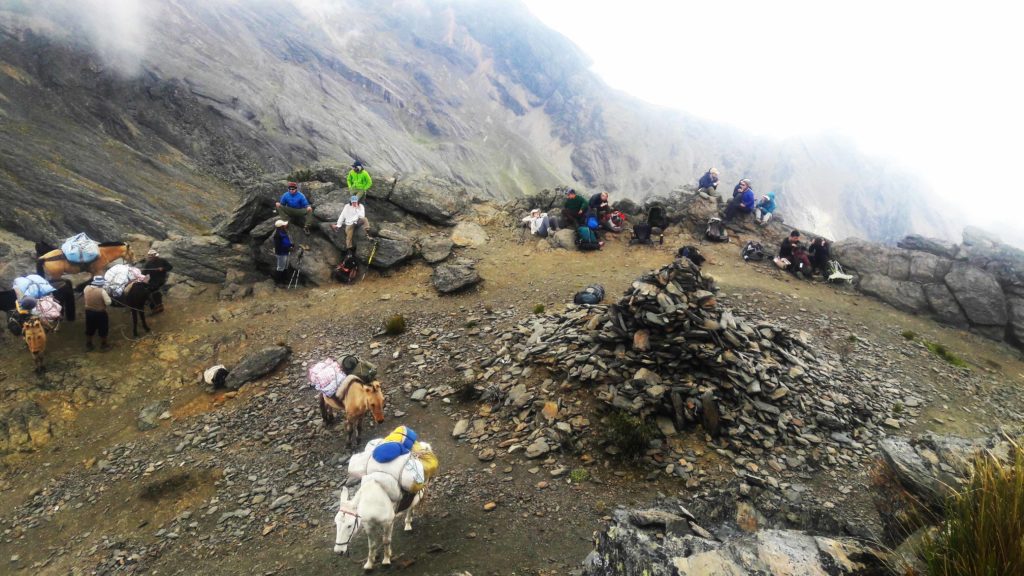 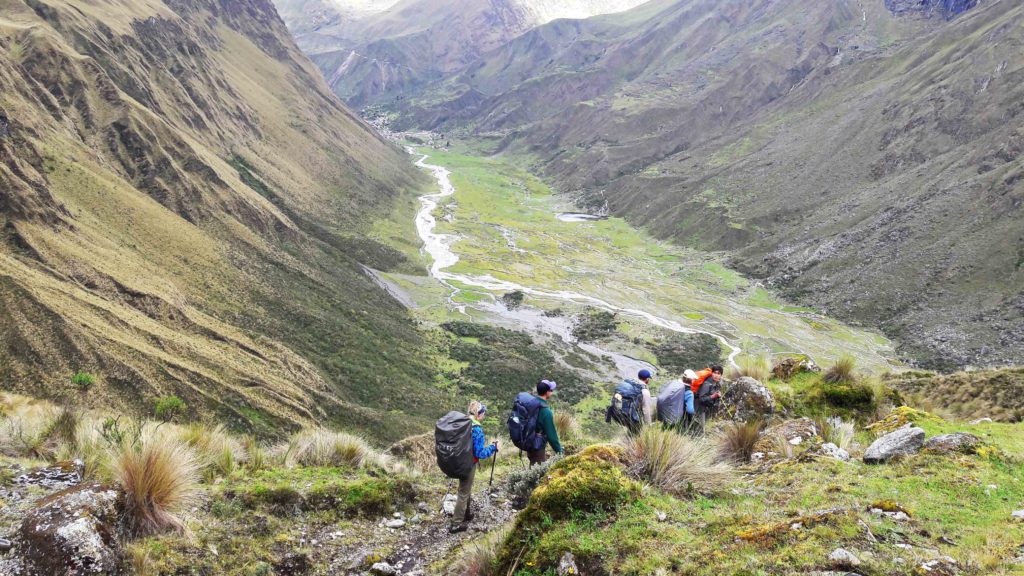 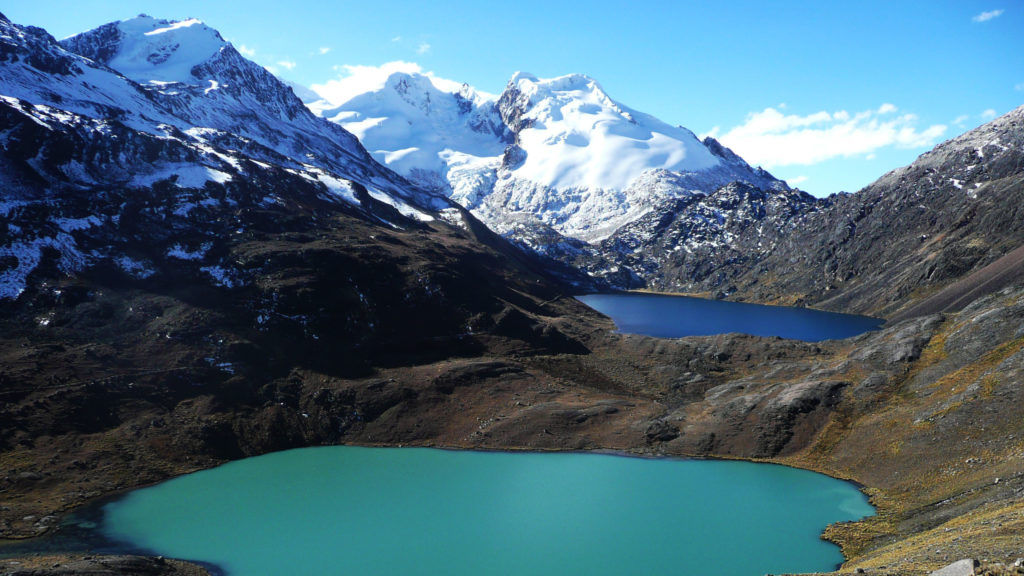 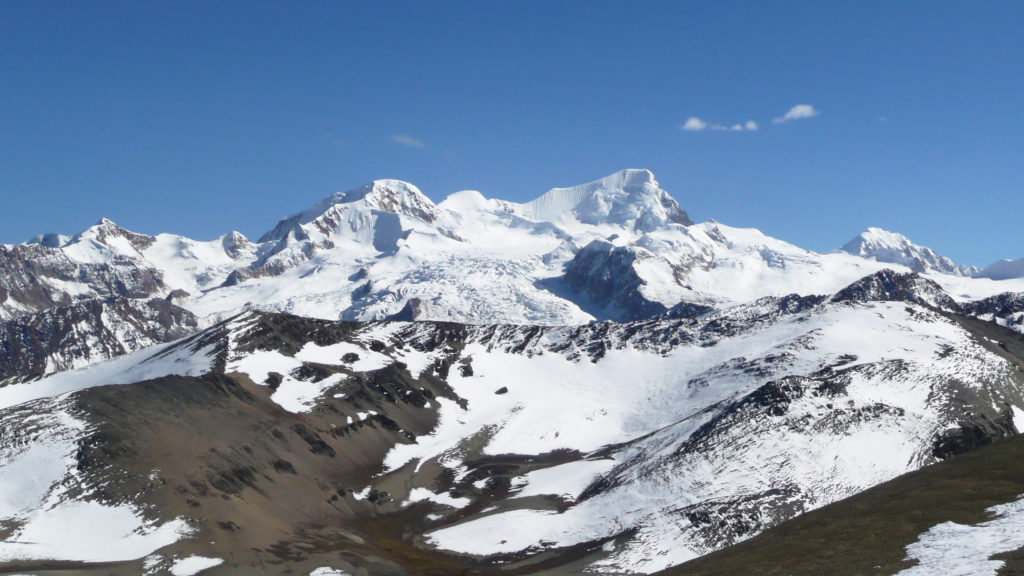 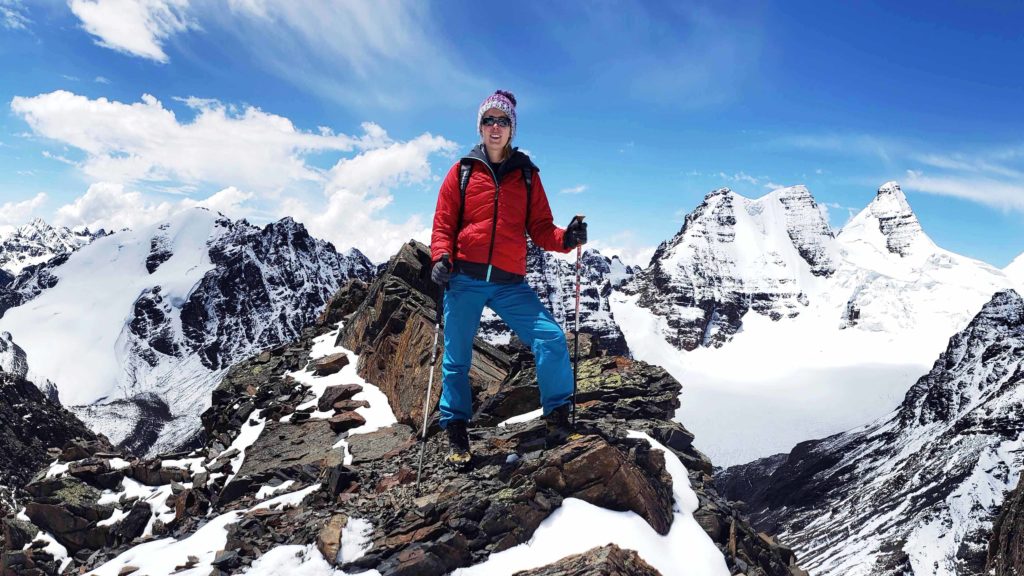 Our last step is the Huallatani pass (4,850 m). From here, on a clear day, we can enjoy the breathtaking views of the Maria Lloco mountains and the mighty Huayna Potosi. It is also from here that our vehicle awaits us for our return to La Paz.

We are able to accommodate both trekking and climbing expeditions on dates that suit you, as long as our guides are available. Most trekking tours are classified as medium difficulty and require a certain level of fitness for all participants. Additionally, for all climbing expeditions, we recommend good acclimatization. We have a number of fixed travel dates for our most popular climbing routes for those who want to join other climbers. The service is similar to our private trips, but since you will be part of a group, the cost may be a bit lower. Group sizes are a minimum of 2 and a maximum of 10 (for safety reasons, one guide to two clients). If you’re interested in joining one of our group outings, please contact us and specify which program you’re interested in. Please note that if there is only one person on a scheduled date, we will continue the itinerary as planned. We will also keep you informed of other similar expeditions in case you prefer to join a different group.