Pequeno Alpamayo is surely one of the most beautiful peaks in the Andes. We approached the peak as a day climb from La Paz. Leaving the city at 4:30 AM in Eduardo’s car, we wove our way around road blocks in El Alto and quickly turned off on the one lane dirt road that heads across the altiplano to the trailhead for the Condoriri range. 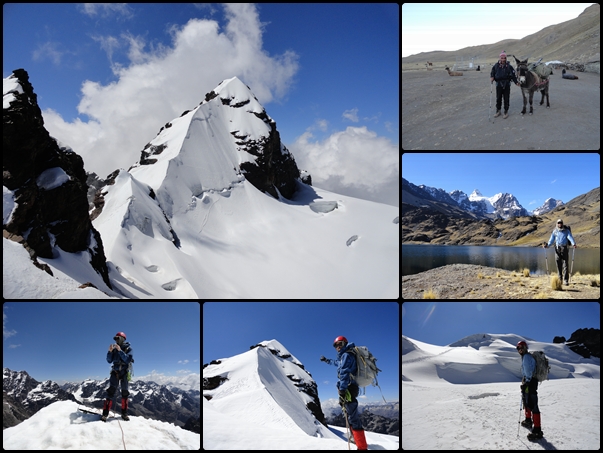 Huayna Potosi was silohouetted ahead of us in the slowly brightening eastern sky. We watched the morning sunlight illuminate the west face of the mountain as we sped along past sleeping llamas to a herder’s hut at the trailhead. There we rented a mule to carry our glacier gear and we began the hike to glacier as the first rays of sunshine began to warm the day. Immediately you are greeted by stunning views of the Condoriri, theHead of the Condor and its wings, all reflected in the pristine waters of a large lake that lies in this enormous cirque. Starting up the glacier, we crossed blue ice in the ablation zone, but quickly were greeted by the crunch and sparkle of Andean powder. Within an hour of starting up the glacier, we were on the forepeak that you cross to get to the snow pyramid of Pequeno Alpamayo. It’s here that you get your first good view of Alpamayo and it is stunning. The aesthetic line takes you up the ridge to the summit in about 2 steep pitches from the col, after clambering down an easy but steep rock section.

Eduardo is a real professional and you can count on him to use the techniques you need to keep you safe on exposed terrain. He is happy to talk through the various techniques if you want to understand the pros and cons of the various options for belaying and making a climb like this safe for beginners. The reality is that climbs such as this are usually easier than they look. The exhilaration is very real though, and the satisfaction of reaching the summit of a mountain like this, with its aesthetic line, stunning location among many well-known high Andean peaks, will stay with you for many days to come. I was lucky to summit on a clear day (of which there are many this time of year in this region) which afforded views up and down the Cordillera Real, across the Altiplano to Lago Titicaca, and of course, the route we climbed starting at the tourquoise lakes in the cirque below, and the valley glacier we ascended to reach the base of the peak.

Eduardo Mamami is a real professional, having climbed in the range for years, pioneering many routes with his brothers, and having put in the time to train as a professional guide. He takes pride in showing tourists his mountains and encourages stopping, taking pictures, and developing the sense of place that is so much a part of his being and existence.